Matryx is an homage to the Nintendo Game Boy handheld video game system[1]. The name Matryx references the Dot Matrix green screen of the device while the figure's colors are based on the device's shell and button colors. The chest tampo replicates the general main button layout with an additional "screen" revealing an 8-bit Pheyden. The artwork was created by Marc Beaudette.

"As a former Gatekeeper and Old War technology archivist, Matryx Pheyden's discovery of the Glitch Breaker now grants him the unique ability to summon sprites from a mysterious digital dimension."[2][3] 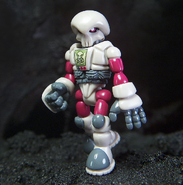 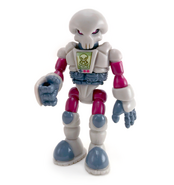