Mechabon is a special reconfigured version of Toyfinity's Robo Force Zetonian kit. The combined creative development was loaded with many different configurations while being prototyped. The Mechabon was designed to play a role in the ongoing Glyos story arc as newer, tougher versions of the Gobon. The original Gobon kit will remain in production alongside the new Mechabon kit.

"Welcoming the new Zetonian/Mechabon mold into the family really sealed the deal for this round to be something extra special. Over the last few weeks, between the Toyfinity debut of the Zetonian form and our follow up reveal of the Mechabon form, we've been internally celebrating the completion of a project that Toyfinity's John Kent and I started over a year ago (with some of it actually dating back all the way to the first new Maxx Zero concepts). As always, working with John and the Toyfinity team was great, and we were able to create another new character together, through the study and reimagining of the classic robots we grew up loving. There's a lot of hidden stuff within this beefy little 'bot, but we know that the coolest discoveries will come from what each of you finds within the parts."[1]

"The new big "bell" body was where it all started, with the goal being to double as the core of a new armored Gobon and alternate RF base from its inception. The Zetonian came into tighter focus once we decided to actually move forward on the project. True dual development!"[2]

"Old Gobon will still be around, no plan to scrap that mold! After all, Gobon is like Michelle's third child!"[3]

Mechabon Juggernaut
Add a photo to this gallery

Mechabon Xycoss Phase Formation
Add a photo to this gallery 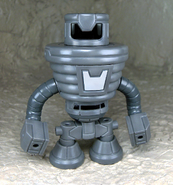 Retrieved from "https://glyos.fandom.com/wiki/Mechabon?oldid=25971"
Community content is available under CC-BY-SA unless otherwise noted.