"Where would the Knights be without their trusty and caring medic, Medic Knight? He's always willing to save a pal, and save a slice!"

"Daz is the first British Knight of the Slice, appointed due to his emergency medicine and first aid knowledge. Although part of the ancillary team, Daz has is no less important, having saved the day many times over."

Powers: Can create force fields around injured comrades for a limited time. The longer it's held for, the more strain it puts on Daz. Secret Identity: Daz Briton. Weakness: Is secretly afraid of guns. Nickname: Boyo, Male Knurse Knight. 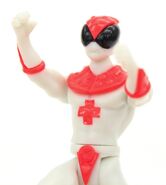 Operation: Cold Slice
Add a photo to this gallery

"Everything loves Medic Knight and thinks he's a real cool dude, but he's actually very weird. On holidays, he goes into the woods and performs unseemly experimentations."

Please note- Slicer and replacement arm do not fit tightly on the Pizza Bot. It's intended as for the KOTS figures. That picture is just a cool way to progress the story.

Add a photo to this gallery
Retrieved from "https://glyos.fandom.com/wiki/Medic_Knight?oldid=24981"
Community content is available under CC-BY-SA unless otherwise noted.