Attempting to add a more human head to the mix, the Microshin Glyan was only run once as an official figure in the line-up before the steel mold was re-purposed. The head itself has been offered loose a few times at conventions in different colors or as a pack-in freebie for some buyers.

"For the last 3 years I've been working steadily on a "human" head for the Glyan, with the idea being that it would allow for some new roads to be traveled as far as creative avenues go. This side project actually went into steel tooling three separate times, each result not quite hitting the target I've been aiming for. I've wanted to share these trials with you guys for years, but have never been too psyched about showing things that I felt were not on point. That being said, I could not miss the opportunity to send some of these production heads from the second trial run out to the show, as the original Micronauts/Microman were the primary inspiration for the original head sculpt I've been battling with over the past few years.

For the first time, some of these heads are out there. The pics above are of actual production heads, not resin. The right ear is a little sunken, the nose is tiny bit flat, and there is the slightest loss of detail on the mouth from the original, but in clear PVC it doesn't look too bad. Not great, but I wanted to show you what's been cooking with this mischievous little head after a number of years. Bry and Bwana's Micronaut custom show seemed like the perfect place to sneak the Micro Glyan out for a mission."[1]

"Speaking of Micronauts, this guy has been doing time in the pocket for a while, only just getting a break since the Ecroyex crew rolled into town.

Even though this head has its little issues, I've come to accept him as a part of this whole weirdo project.

The little scarf from the new Ex/LSA/Dark mold was designed specifically to be used with this now defunct humanoid head. The new belt was also sized to be used as a Glyan belt, as well as deep collar/scarf thingy (pics later).

The mold for the above head has indeed been destroyed at this point, and there was even a third head (also not destined for the ranks) that was run a few times. So far there have been three separate PVC attempts at nailing just the right human head, this one being the second round (and I think the most acceptable of the trio).

Even though the human head steel mold cavity has been re-purposed (for a special project debuting in early 2014) , we did run a batch of the above head, just to have in the archive."[2]

"The human head will most likely continue to drive me crazy for the foreseeable future, and I really appreciate being able to share the process of trying to solve this riddle of a sculpt with you. My desire to make Contra style combinations simply will not die! 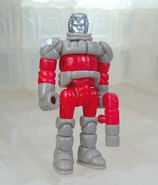 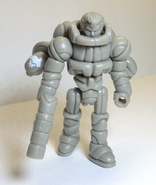 Axis Armored Microshin
Add a photo to this gallery 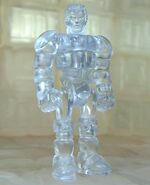 Retrieved from "https://glyos.fandom.com/wiki/Microshin_Glyan?oldid=20085"
Community content is available under CC-BY-SA unless otherwise noted.