"My Lord, I believe I gained all knowledge when I touched your sigil. We can wonder the whys and wherefores as we march. First we must build you a legion to command should we happen upon any resistance."

"The first among the heartstones to fully form into a Golden Gohlem surveys his new body and the land around him noticing the large formidable being at the center of the life giving tendrils. He approaches the golden warrior and quizzically places a hand upon the symbol on the large one’s armor. The same symbol burns itself into the Gohlem’s golden hide. The Gohlem smiles, "Lord Gearion, you have returned to us. Much has changed."

"Yes, it appears I have returned. What on Monkaa could be so powerful outside of the Lifespring itself to resurrect me? The memories are faded. The last I can recall is falling from the peak of the Great Spire with my dear son Empyreus in my arms after..." The Lord of Light gave pause, his eyes began to glow with fury, a fiery hatred burned within him, "...After my eldest, Penumbrus drove the Blade of Shadow deep into my back!" He grabbed the Golden Gohlem by the throat and lifted him into the air, "Where is Penumbrus? I must have my vengeance on that dark souled demon! And if the Crown of Light sought me out, where are my heir and my queen? What has become of Empyreus? Mistress Noiria?"

"Lord... Please… release me," pleaded the Gohlem. "I can help you find them. There was a terrible battle. The Citadel was decimated. Attacked by a mighty army of shadow and blood. Many Gearo and Gohlem lost their lives. We... we can find answers there. Spare me to do thy bidding."

Gearion lowered the Golden Gohlem to his feet. "Yes, the Gearo Citadel, Fandar Sun and the Lifespring will have the answers to these riddles. Such as, how is it that a Gohlem, newly formed of a heartstone that until just moments before was buried beneath the rock and stone, knows so much about what has transpired before his birth?"[1]

The Lord of Light has arisen, but is Gearion the same Monkaarian ruler that Palidar and the world knew before?

Based on the Golden Age storyline.[2] 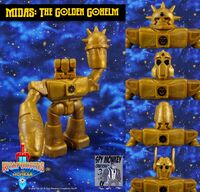 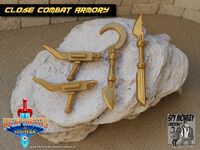