Mordireus Callgrim utilizes the same color as the Onell Design color of the same name that debuted in the Council of the Travelers release in December 2012. This item was not originally shown on the Toyfinity Blog when Club Zeton 2015 subscription first opened. It was revealed a Rawshark crossover would be shipped out on the Facebook page. 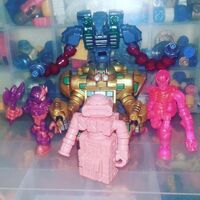 Add a photo to this gallery
Retrieved from "https://glyos.fandom.com/wiki/Mordireus_Callgrim?oldid=18951"
Community content is available under CC-BY-SA unless otherwise noted.