"The orange serves as an accent on another set of figures in this wave, with callbacks to more than one old team. Hopefully long time collectors will enjoy the subtle connections when they pop up."[1]

"The base PVC on the Mraedis is pure white, the painted grays are cool versus the warms of Skaterriun, but the orange accents are the same (and also carry through from the recent TFV). Grouped together, these different teams look like a Real Type family reunion!"[2]

"Fully painted to keep everything matching.

We did also run some orange PVC Axis Joints for this wave, but the color didn't come out completely on target (slightly muted), so we had the outside only of the orange scarf painted that comes with Commander Mraedis to stay consistent, but not create a paint on paint scraping situation.

Certain colors are very challenging to 100% match between injection and paint. Orange is one of those colors."[3]

"We put a lot of attention into that loaded Hub Set! Ha! Also tried a new wraparound spray mask on the Traveler chests."[4]

"After the events of the Xenodeth Outbreak on Point Cerrek and Planet Esedeth, the Villser started to focus on one unique Gendrone that they encountered during their intense battle with Task Force Volkriun.

If Argen won't join them, perhaps another powerful Buildman will..."[5]

What secrets do the Mraedis Agents carry, and will they survive to deliver them?"[6] 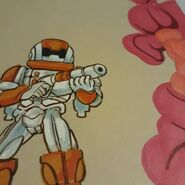 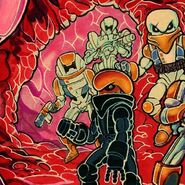 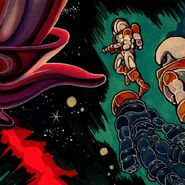 Worlds Within[7] (Artwork by Ralph Niese) 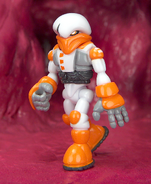 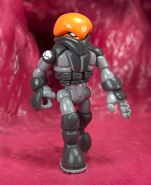 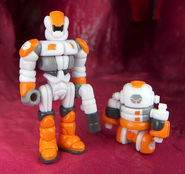