Glyos Wiki
Register
Don't have an account?
Sign In
Advertisement
in: Article stubs, Cult of Dred, Major Characters,
and 2 more

Most notably Nazgar's robot body had the ability to grow. His legs extended at the boot allowing Nazgar grow to 1.5 times in height over his enemies.[1]

Over 10 years ago a scientist, Dr. Fury, was researching how to transfer a brain into a robot body when he was kidnapped by Hun-Dred and the Cult of Dred. Their goal was to transfer the 2,000 year old preserved brain of the evil dictator Nazgar the Tyrant into a new robot form by using Dr. Fury's experimental techniques. Reviving Nazgar was a success and he soon set out to reconquer Zeton, the planet he had ruled in his previous life.

In present day Mark Fury, son of Dr. Fury, has constructed Maxx Steele and his friends to help find his missing father. Their search, along with Deena Strong, leads them to the new headquarters of Nazgar and the Cult of Dred nearby with a laser weapon ready to be used on the Zetonian people. A confrontation quickly occurs and Nazgar escapes while Maxx Steele and company stop the Cult of Dred's nefarious plans. With the laser weapon destroyed and Dr. Fury saved, Zeton has new champions to confront the possible return of Nazgar the Tyrant. (Synopsis of Ruby Spears animated feature.[2])

"Nazgar was the legendary unreleased "big bad" of the Robo Force line, shown in the 1985 Ideal Catalog but never released - and now you can own him!" 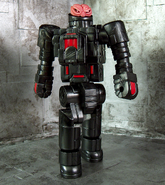 Regal NAZGAR™ the Tyrant returns in all-new regal GOLD! (Nazgar head only - build a full Nazgar by combining with any Robo Force and Zeroids kits. 1 total part. Released on May 13th, 2018. $1 each. 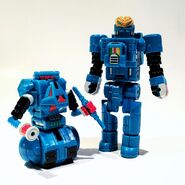 "The greatest villain of the ROBO FORCE® - now M-POWERED by mysterious M-ENERGY! Includes one Robo Force® kit, one Zeroid® kit, and one special edition M-POWERED Nazgar™ head! Can build Nazgar™ and the Technician Zeroid® at the same time!"

POWERED UP Nazgar™ the Tyrant

"ROBO FORCE® - UZALEK-BLOOD INFUSED NAZGAR™ with Techno-Fists and CULT OF HUN-DRED® DEATH ZEROID® (formerly FINAL NAZGAR) The ultimate Tyrant and his deadliest follower! Includes one full Robo Force kit and one full Zeroid kit - with bonus brain for maximum Nazgar fun! Combine them both to create ULTIMATE NAZGAR! The final Nazgar to be released by Toyfinity!" (Uzalek-Blood Infused store description)

A blank Black Maxx Zero kit ($15 each) and blank Black Neo Zeroid kit ($10 each, no Nazarran brain) were offered separately at the same time. 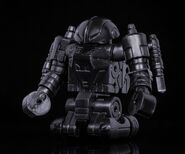 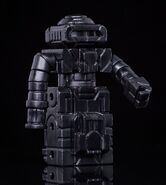 The Nazarran are horrible creations of NAZGAR THE TYRANT - and now, they have gotten their slimy tendrils on advanced versions of Nazgar's battle suit! Maxx Zero won't know what hit him!

You can build the Nazarran Battle Suit by combining one Robo Force kit and one Zeroid kit (which includes the Nazarran head.[3] 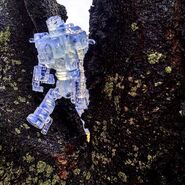