The first of the Neo Zeroids figures released to the public outside of Club Zeton membership. Assassin's design was based on the Neo form of Zintar and sent on a special mission to recover Zeroid tech from organic life. He is joined by Zeroid Striker, a loyal companion and protector, and soon meets Maxx Zero's Robo Force team. 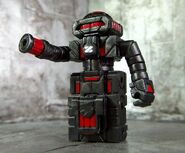 "Assassin and another Zeroid."[1]
Add a photo to this gallery

Retrieved from "https://glyos.fandom.com/wiki/Neo_Zeroid_Assassin?oldid=24694"
Community content is available under CC-BY-SA unless otherwise noted.