This package deal includes not only the Heavy Spiral Vector Jump figure, but also a Limb Pack, matching Hat and Slicer, AND special clear purple armor for a special discounted price! Use the spare pieces to build the secret Raw Knight: Neon Punch Knight! 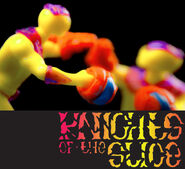 Retrieved from "https://glyos.fandom.com/wiki/Neon_Punch_Knight?oldid=19315"
Community content is available under CC-BY-SA unless otherwise noted.