The 481 Universe is everywhere and no where. It's constantly changing. As a whole it has never stopped shifting, evolving and mutating. No one inhabitant can ever tell the whole story of the 481 universe. They are a fractured people who's history has been written, rewritten, lost to time, rediscovered and ignored.

Ni Stuff has been running his 481 Universe since 2011 starting with The Anomalies. He quickly expanded to Glyos customization with painted figures and heads before finally releasing his own addition to the Gylos universe: the Outlander. The first Test Shot Outlander appeared in March of 2013 followed by the first production drop on July 5th, 2013.[1] 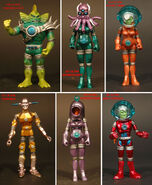