"Traveler Ollereyn trying out some Swing Joints for a new look. The arms can look a little long if completely straightened, but with a little elbow bend the form looks solid."[1] 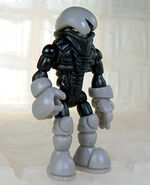