Wave 22's color scheme is based on Glyos System Series (Toyline) fan Pappysoup's fan fiction cataloged over a few years on his Blogspot website[1]. The fan stories are not officially canon to the main story of the Glyos System, but can be read as a fun supplement.

The MT-01 was intended to be a Pappysoup Exclusive for release in 2009 likely around Wave 8, but was delayed for unmentioned reasons until finally joining Wave 22's Task Force Volkriun theme. The Wheel Set would have been a new addition to the Glyos System as the items were still a Beanbot/BeantownToys.com Store exclusive as part of the Spoon Racers[2] at the time. The Wheel Set would eventually crossover to the Onell Design Store in December of 2010 with Wave 12, but a green version was never offered separately on its own.

"The MTs have come to our planet in search of Buildman units to liberate. Gen-Cog gave them sentience and freedom of thought, and they have started to reconfigure themselves..."[3][4] 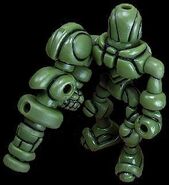