"This contained build was designed to take advantage of the new paint application to the top part of the old Phase Arm. For years I would make customs using the Phase Arm top piece as a head, developing a small team of "Phase Hunters" that I imagined as a kind of offshoot Gendrone creation that would shadow the Travelers. I usually had some form of a Phase Hunter floating around my little games since we first could use the production parts.

The Phase Defender is pretty simple, and versions of it have been laying around here for a while, but having the actual newly painted parts helped tighten the final combination that you see above. I really wanted to nail a convincing configuration that could be assembled from only our "accessory" sets, right out of the factory.The longer proportions were incorporated because I was also thinking about using this as a Delphi base body at one point (it can be converted to an even taller design with a few tweaks).

The full build is made from 2 complete Phase Arms, 2 complete Gobon Blasters, 2 complete Hub Sets and 2 complete Axis Joint Sets. Originally I had the back collar armor across the chest, which gave it a pretty interesting look but hindered the movement too much. I also had turned a scarf upside down and put it over the Phase Arm top head turned sideways, which looked kind of spaceknight-ish. I ended up going with the most basic mechanical choices which I think make this little guy more fun to actually play around with. It has a solid feel in hand and holds together well in the pocket. Expect to see this configuration show up again in the not too distant future."[1]

Standing before them was a shadow taking up the entire hole. Armodoc in size, but only a single eye peered intensely at the grounded Travelers. "Wha..." coughed Neo Legion Pheyden, "IMPOSSIBLE!" The smoke cleared. Upon the thick arm laid the symbol whose meaning had changed: Glyaxia Command. 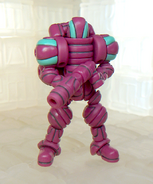 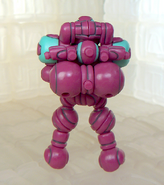