"Pink Army set includes two articulated figures, a bunker and a cannon. Paint apps on face, arms and body of each figure, plus tampo print on one of the helmets and the bunker. This contained build comes with all the parts found in two standard Banigoth/Red Army Men figures plus one vinyl bunker for a total of 30 PVC + 1 vinyl plastic pieces. All parts are completely interchangeable with all Glyos System Series figures."

The colorway theme will be pink, and part of the proceeds will be donated towards breast cancer research, so now more than ever we appreciate your support. 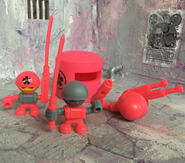