An Old Heroes character originally featured in the Harley & Marley childhood comics in the mid-90s before being adapted to the ongoing Knights of the Slice series.

"Prototops is a Cherubium, a creature cursed with an dinosaur head but a humanoid body. He's an intensely private being, and his origin is unknown, but he is a respected member of CroMega's inner circle. It's alluded to that he is one of many dino-related cherubium on Pangea Island, and he's often advocated for the marginalized group."

"A material style figure, in Kinnikupeach, perfect for customs or army building! Includes a second fully painted head. Be sure to read Harley & Marley, Summer of Knights, and The Battle For Pangea Island to get the full story on good old Proto!" 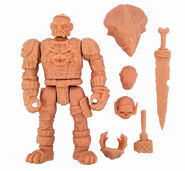