Small Crawlers were sent out "to collect information and explore the Deep Ruins on Planet Reydurra itself."[1] They were to also function as personal guardians for when things got dangerous. The Reydurran Science Division discovered an Infection deep within the ruins which managed to spread to the Neo Aves Exellis. All three Council teams issued Combo Suits to the Glyans to contain the deadly virus from spreading beyond the planet.

The Reydurran Armorvor was almost identical to the Hades Mimic from the previous year's release, with the exception of the red details replacing the mint green ones and, of course, a different wolf head color. For those unable to get a Hades Mimic, either from the original drop or on the aftermarket, this meant that collectors could still own an awesome full black armored figure for $8. 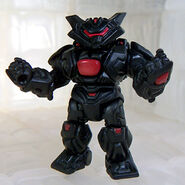 Retrieved from "https://glyos.fandom.com/wiki/Reydurran_Mimic_Armorvor?oldid=30869"
Community content is available under CC-BY-SA unless otherwise noted.