The Rig Crew Mimic Armorvor was released alongside the Neo Phase and Stealth re-issue (MK V). It was the last time the Armorvor would be released with the original wolf head sculpt, as all subsequent drops, including October, would feature a brand new head design. 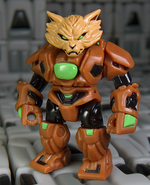 Rig Crew Mimic Armorvor
Add a photo to this gallery

Retrieved from "https://glyos.fandom.com/wiki/Rig_Crew_Mimic_Armorvor?oldid=30896"
Community content is available under CC-BY-SA unless otherwise noted.