"The Deep Space Recon Domes make their assault on Rilleco..."[1] 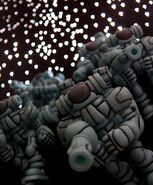 "The not so mysterious leader of the DSR Dome Forces surfaces... and it's General Phanost! With new powers gained on his long journey through the Glyos System, The General has his eyes fixed on Planet Rilleco...."[2]

"Agent Nemica suddenly finds himself surrounded by the very prey he had been tracking! Now a target of Rilleco Chaos and his twisted clones, the odds seem stacked against even a chance of survival. Nemica's Glyaxian training however, does prove to be effective in mounting a counterattack..."[3]

The film opens with a flashback to the ending of "The Cliffs of Granthan," with Pheyden uplifting Argen to sentience and taking the Buildman away to serve a new higher purpose. Some time later, near the cliff where that pivotal scene occurred, the Granthan division of the Rig Corps is camped for the night. Commander Reyus informs rig operator Gearius that Glyaxia Command has issued them new orders: the two of them are to take one of the Rigs and investigate a set of coordinates, with the rest of the Corps arriving to meet them afterwards. After operator Klace is instructed to await their message, Reyus and Gearius set out, both noticing strange energy levels that Reyus finds somehow familiar, and they take the Rig down to the bottom of the cliff.

Because of this unexpected occurance, the Armodocs identify Travelers as the enemy and turn against their creators, capturing Reyus and two Gatekeepers. The remaining Gatekeepers warp away while Scar Pheyden defends Gearius by destroying Armodocs, eventually unleashing a massive burst of energy that leaves him drained and turns him green. All hope seems lost when more Armodocs appear, but Viyer returns and holds them off long enough for Gearius and Scar Pheyden to escape through the Dimension Gate.

Moments after they leave, three Delphi arrive on Rilleco, noting that they have ensured the cycle's continuation and hoping for forgiveness for what they have done...

"We are super psyched to unveil our new joint project - The Gendrone Chronicles! This all new online comic tells the tale of Buildman Argen and what he's been up to since deciding to stay on Rilleco."[4]

"Argen's connection to the Planet Rilleco runs very deep, and quite often he finds himself returning to the dark and mountainous world in search of solace. Watching the indigenous lifeforms simply cycle through their patterns brings Argen a great sense of peace in an otherwise trying time."[5]

"Exists in the shadows and caves of Rilleco. Can store energy gathered from lightning storms. Uses a unique bio laser for breaking through rock while searching for various prey."

The Lost Children of the Delphi

With Glyaxia Command pushed to its limits and on the defensive, the combined Armorvor Armies swiftly establish outposts across the worlds of Volkria, Sonesidar, Reydurra and Rilleco, crushing any opposition through the use of their powerful Black Core technology. The Lost Children of the Delphi now stand on the edge of reclaiming what they believe is their collective birthright ... the entirety of the Glyos System."[6]

Retrieved from "https://glyos.fandom.com/wiki/Rilleco?oldid=29329"
Community content is available under CC-BY-SA unless otherwise noted.