STAR TEAM - the exploration group formed by Zeroid Steele to carry the message of Zeton out to the stars. 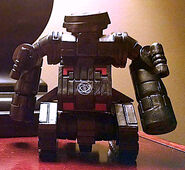 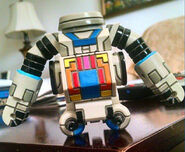 A scientific research facility on X'Arb'ea. The Ranger Division were stationed with a cache of non-activated Explorer Neo Zeroids and hundreds of half constructed Zetonian robots in storage at the facility, coated in a base white paint. The scientific outpost has since been abandoned.

The Solar Storm Scouts had been a group of more aggressive Zetonians, matched with a chromed orange ZEM unit numbered 78. They left behind a octagonal plate marked with the symbol of the STAR Team inside the Zero Lock. The plate magnetized to Maxx's chest as it shifted his colors to match the original orange hue of the original Solar team.