"New stuff is on track for the end of this coming week. Black, gray and white across the boards as well as a few surprises in the mix.

I've been building like crazy and having a lot of fun continuing the Glyanaut construction patterns. These basic colors seem plain at first, but once combined they are probably my all time favorite ones to build with. Something about the simplicity brings me back to my youth. Snake Eyes, Storm Troopers, Clawtron (ha!) and of course Darth Vader all represent the most basic of color styles just to name a few. Our little guys will never reach those iconic levels of design, but it is fun to play in the shadows cast by the old masters. Plus, I can finally make the triple colored Command Pheyden[1] that appeared on this blog back in 2008, the original of which I had to leave in China for a paint master on one of my trips there. More pics will begin rolling out tomorrow as well as the assortment details for the Mono Wave!"[2]

"Glyanaut Cane - You have been selected for training in Glyaxia Command's Operations, Tactics and Reflex program. All OTR trainees must exhibit proficiency in Rig Symbiotic Integration and show combat readiness under any circumstance. Please proceed to Sector X and prepare for orders." Commander Scar Pheyden barked at the trainee. "Yes Commander!" Glyanaut Cane eagerly replied.

"Test your skills and survive the Glyoid forces for 2 minutes. Good luck soldier." After completing the grueling tasks of Operations, Tactics, and Reflex courses Cane found himself in front of The Scar Pheyden Commander once again. "You did good this time Cane, but remember... this is only a simulation!"

"Stay in formation soldier, don't get distracted again..." the Glyanaut repeated to himself. "STAY IN FORMATION!" called out Cane's scarred Commander leaping overhead at the Glyoids. "Commander! Pull back!" Cane pleaded, but it was too late. The momentary distraction as the Commander answered left him overwhelmed by the Glyoids. "Cane, finish the mission..." he commanded as a Core Virus was detected. The Axis Armor override began to engage...

Earlier that day, the Commander called for attention. Two fresh Sarvos recruits had arrived for Glyaxia Command's Operations, Tactics and Reflex program -- also known as Sector X. "All OTR trainees must exhibit proficiency in Rig Symbiotic Intergration and show combat readiness under any circumstance." he repeated as if he had given the introduction before -- he had. "Welcome to Sector X, Glyanauts!"

Glyoids were approaching. "Get to your Rigs!" the Commander ordered. "Remember your training and be ready... Not everything is as it appears."

"After the success of Project Black Skull, Glyaxia Command placed a razor sharp focus on identifying more "advanced" recruits within their various OTR Programs through something called the Marivok Directive."[5]

Glyos Catches Mono, The Rest Of Us Get The Flu 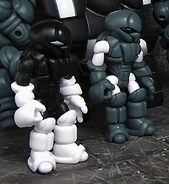 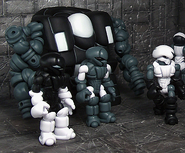