Meanwhile, back in the tunnel... a lone Glyan stands guard over the Neo Phase pool. However, the shadows are hiding something... something invisible... something... Stealth. "Commander?" the Glyan cautiously asked as he peered around the room. The invisible hand of fate clutched his helmet and squeezed with ease. "No..." said the voice. "Fragile creature.." the invisible voice noted as the camouflage drained away to reveal a beastly Armorvor Sonesidar mimic. The infiltration into Frontier Base Alpha had begun....[1]

Matt over at Onell design describes the color of this Armorvor as 'yellorange', a perfect mix of yellow and orange that again, is best seen in hand to appreciate. By chance I noticed that the wolf head on the Sonesidar has a neck paint app color (grey) that is unrelated to the other colors on the figure. No other Armorvor has this, so I decided to go straight to the source and ask Matt if he could shed some light on the matter. His responses was,

"The Sonesidar Armorvor wolf head does indeed have something slightly odd happening with the neck paint. Originally, our factory mistakenly painted all the necks brown, matching the technical details to the furry head! I asked that the paint be corrected, and matched to the yellorange PVC. Well, the match was not quite right, arriving as a full shipment before I got a proper look, due to a hiccup in communication. When I saw the final product, it seemed like something that would be a neat oddity in the long run, so they were released into the wild!" -Matt Doughty 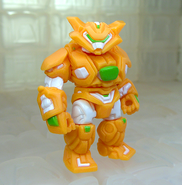 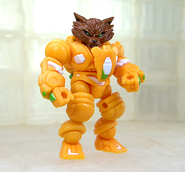 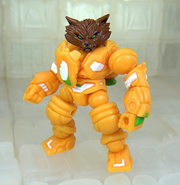 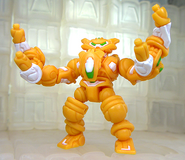 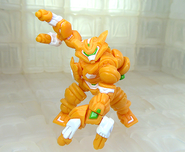 Retrieved from "https://glyos.fandom.com/wiki/Sonesidar_Mimic_Armorvor?oldid=30866"
Community content is available under CC-BY-SA unless otherwise noted.