The hardest working Saucer Ships in outer space have known many owners as time has gone on. In the earliest days the Prime Zeroids used the ZEM XXI Explorer Module to travel across space visiting alien worlds and escape a few others. A later special Zeroids team known as STAR Team would use a variation known as the Star Hawk to protect Earth from the Knight of Darkness and his Shadow Warriors. More recently it has been vehicle of choice for Maxx Zero and his Robo Force team. 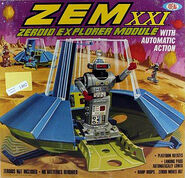 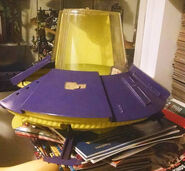 Vintage toy
Add a photo to this gallery

The second generation of flying saucer ships, the Star Hawk was exclusively used by the STAR Team and featured in the one-shot STAR Team comic book. The default color of the Star Hawk is Red with Grey underside, though a second version of Grey with Red underside has also been found inside the box. At some point in time the Star Hawk will be claimed by a new owner and renamed "Star Falke" ("Falke" is German for "Hawk"), though the exact details are currently unknown. The actual Star Hawk toy was named "Raumschiff Star Falke" or "Spaceship Star Hawk" when released in Germany in the 1970s under the STAR Team brand from Ideal Toys. 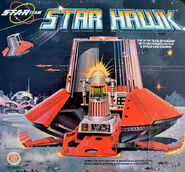 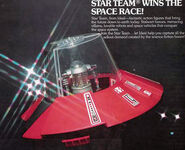 Star Hawk advertisement
Add a photo to this gallery

Finding itself in the claws of Maxx Zero on his 50 year long return voyage to Zeton, the Star Falke would soon be a busy machine carrying the members of Robo Force around as they battle Nazgar and the Cult of Dred. The Star Falke made a side trip to Diavolus where ZEM and the team discovered a golden Maxx attempting to enslave a planet. Following this, Maxx and his new companions -- Neo Zeroid Assassin and Zeroid Striker -- joined together along with Sentinel to track down the lost members of the Zeroids.

Star Falke landing on Zeton
Add a photo to this gallery
Retrieved from "https://glyos.fandom.com/wiki/Star_Falke?oldid=17957"
Community content is available under CC-BY-SA unless otherwise noted.