"When I was putting this order together months ago, it was due to a strange series of dreams that looked much like the images that have been on the blog in the past week. Transmissions of a geometric base, created from some otherworldly hard light ice, kept creeping into my mind, night after night. The idea of making these dreams a reality seemed far away, due to a number of production issues that exist for us when running clear vinyl. I was close to writing the "Stealth Dimension" off, and not pushing for the clear vinyl, but an opportunity came up and the option for Stealth (with bubbles and waves of course) appeared for what looked like the last time. So the trigger was pulled and here we are!

Since this will be the last of the clear colorless vinyl we produce, we decided to make a larger amount than we normally do, even though the chances of it selling through at a speedy rate would definitely be far lower and we would have to invest more than usual. I imagine that the Stealth vinyl assortment should stick around for a bit longer, and I hope this run supplies you guys with some slightly cheaper fodder for building some fun configurations. You can always turn it black with a little vinyl paint if you want to make a meaner looking machine!

The clear vinyl might seem a bit bland at first, but when you start building or sticking things inside it, something about it comes to life, with an interesting stacking of clarity that looks very alien and almost organic, like viewing a weird 3D X-ray. Anyway, you get the idea."[1]

Stealth Dimension Division - a member of the United Glyan Coalition.[2] "The team is like a Deep Science Unit, working on concepts in a special Phase Dimensional Environment which allows for unlimited creativity."[3]

"With the ability to easily manipulate everything around them and rapidly test new designs, the SDD are responsible for many technological advances and innovative applications of existing hardware. The SDD come up with ideas, soft test them as "Phase Phantoms" and then send their plans to the Experimental Mechanics Division (EMD), who really push the designs and bring them into the "real" world."[4]

"ALL the Stealth Dimension Division Clear Colorless vinyl parts have MULTIPLE RANDOM AIR BUBBLES and VISIBLE ROTOCAST "WAVES" throughout the material. This is due to the process used to create rotocast vinyl at our factory in China. The process used to create clear colorless vinyl in Japan is much different and yields a product with a higher clarity. We will not be running this clear colorless rotocast vinyl again. Even though the clarity is not hyper translucent, the quality of the vinyl is just as high as all our previous runs and the parts feel and fit great."[5] 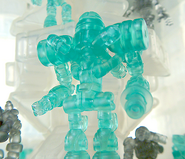 Smoke on the Horizon

"Some pics of the SDD Base while everyone on the team is at dinner. Well, everyone except for that moody Smoke Glyan. He had a big lunch."[6]

"The Wedges and Switch Pins have taken over my mind. It's fun to see how far the simple geometry can be pushed and what your eye begins to identify in the shapes as they build up. This is the first little guy that got the clear ball rolling. A mid sized Crawler that can become entirely flat, with just a few simple twists and turns an insectoid form takes shape and it's ready to shuffle some Blocks around in the Dimension Base. When the work is complete the Crawler reverts back to its pancake mode and scoots on out of the way."[7]

"The central platform of the Stealth Dimension Base started out as this kind of geometric UFO for Pheyden.

Building off the central "ball" inspired design, the Saucer has three Blocks integrated into its structure, with one located in the center of the ball and one inside each outer "wing". I imagine that since the Wedges are little semi-sentient creations in my tiny mind, the entire combined ship can reconfigure very quickly, and by summoning more Wedges can become the main hub for a central base setup.

Depending on what kind of Traveler is "Blocked" inside the main ball, the connected constructs become imbued with abilities that reflect that contained Traveler's own specific powers. The Traveler can then take control of the complete structure and alter its entire form with simply a thought.

I have definitely been playing with this stuff for too many weeks in a row! Hope you guys enjoy the pics of this odd build."[8]

"Being obsessed with the beefy style robots of the 80's has really influenced the building theory applied to many of the vinyl creations that pop up on this blog. There is something about a slight SD (Super Deformed) look that just appeals to me. I still love the hard edged, more real looking mechanical marvels out there, but in the end I always play with the beefballs the most. That kind of reads gross, doesn't it.

A personal challenge for this round of vinyl (outside of the base and saucer) was to create a build that used only the Wedges and Switch Pins that was big and solid. The "solid" aspect always proves to be the main obstacle when going very large with a build (vinyl or PVC), so the structure on the SDD Heavy Combat Armor shown above had to be extremely sturdy. After a number of experiments, a "dual" upper leg assembly formed and that really gave the rest of the build a strong foundation to stack on. The arm cannons have some good movement, and the multiple opposing angles help to keep their positions without the dreaded "droop" factor setting in. The thruster pack on its back can fold out into a set of small wings that can also get some fun positions. The central area has a strange assembly, as the parts are pushed through each other in a curved letter "C" style that locks into itself. Kind of tough to accurately describe it, but the result is a very tight and solid fit.

The complete build stands nearly 10 inches tall and weighs about 3 lbs! There are just under 60 Tri Hub Wedges and roughly 100 Switch Pins used in the construction. It feels like a big brick and is not fidgety or loose. It can also stand and not fall over after 30 seconds, which was the biggest hurdle.

I'm feeling very tempted to paint it up. What do you guys think? Paint or no paint? Maybe I'll leave some clear parts and use some dye to give it an extra real "Real Type" vibe."[9]

"Been meaning to post a few pics of a Tri Hub with the sides cut out, which creates a "Penta" Hub. Looks kind of neat, like a vinyl pin cushion."[10] 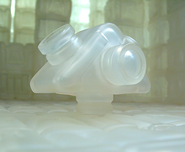 "Before the Block Fortress came down I took a few pics of an SDD Variable Suit with the lighting switched up a bit. This time everything was lit from behind, giving a very moody look to the shots.

There was some "creative" cutting done on this build, with lots of little options to beef up or slim down the frame. I really wanted to have something that my Neo Voss Pheyden could chill out in while we pack for the next bunch of days."[11]

"Some more pushing and pulling with the light sources. The SDD Variable Suit has been outfitted with an opening cockpit that stays attached to the build when opened due to the "hose" that connects it to the bottom part of the construction. The parts fit tight with no "wobble" and give Neo Voss Pheyden some extra head room for his big melon.

I've been thinking about the Stealth Dimension Division as I've been working and I like the idea that this team is like a Deep Science Unit, working on concepts in a special Phase Dimensional Environment which allows for unlimited creativity"[12]

"Above are a few shots of a pretty simple "Heavy Runner" that I've been playing around with. I kind of imagine Cane looks like this when he hangs around with the SDD. There is a Megazone 23 Garland vibe going on with this one, which was one of my favorite mecha designs from back in the day. More proof of Shinji Aramaki's genius!"[13]

"Heavy Runner in Reverse Mode. There are a number of other forms as well, but I think I like this BSG Viper influenced one the best of them. The Switch Pin looking like a big headlight (or maybe a Phase Cannon) is kind of fun."[14]

"This vinyl build is my attempt at a more "heroically" proportioned character, something that would also be able to stand next to an original Takara Robotman/Biotron and sort of fit in scale wise. This is a very tall configuration as far as Glyos goes, clocking in a just over 11 inches from head to mecha boot thing.

The head (which forms the back part of a Warp Bike/Rig Runner) in particular is something that I've been wanting to pop on the right build as it was originally designed to look like an armored Traveler noggin (hence the three "teeth" and round inner dome). Jesse did a completely awesome build for our buddy Phil Reed of Battlegrip.com a while back that used this "head" on a crazy Devastator inspired configuration that was truly a knockout!"[15] 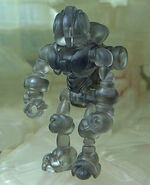 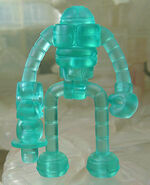 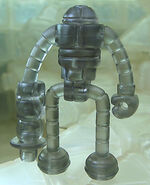 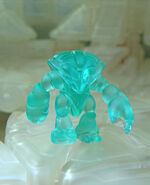 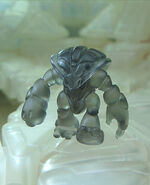 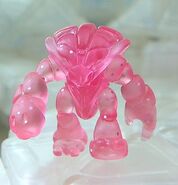 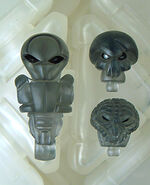 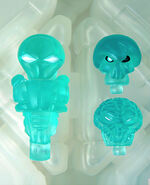