While his last Lore appearance was during the Enigma Source recovering, a Thank You post for Wave 56 revealed a Secret Build of Sullonev using Glyarmor Viyer.[1]

Observing from a safe distance, Viyer and Sullonev quietly watched the battle unfold. "Curious..." Viyer noted, "the small one does not behave like a Gendrone." Sullonev took the hint, "Analyzing unknown entity..." It would only take a second.

"Analysis complete." Sullonev's wrist screen began to display the results. "Commander Viyer, this entity, it's..." he paused as he saw the final results of the target. A Proto Sincroid was before them. "Sullonev, bring it here." Viyer ordered. "Yes, Commander." answered Sullonev as he warped away and into the fray of the losing battle. 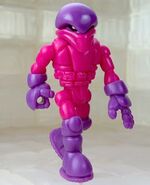 Neo Gatekeepers Sullonev
Add a photo to this gallery

Retrieved from "https://glyos.fandom.com/wiki/Sullonev?oldid=19221"
Community content is available under CC-BY-SA unless otherwise noted.