"The Curse of Ayosire" is the third Passcode game, featuring characters from Wave 9 including Dark Scar Pheyden, Commander Phosis, and the Armodocs.

Deep in the Glyos System a secret place exists. One beyond the limits of time and space... Ayosire. A dream for the chosen, a nightmare for the wicked. Legends tell of Celestial Beings who dwell within this void, guardians of infinite knowledge and unlimited power. Many Travelers have set out to unlock its mysteries. None have been known to return.

Dark Scar Pheyden warped into Ayosire. A place where the ground and sky were rolling storms of anger with flashes of lightning. The horizon line shown of stars from beyond the last reaches of Ayosire's borders. The scarred Pheyden was alone.

"I've searched for so long..." whispered the Dark Scar Pheyden to the ether of Ayosire, "Traveled so far... finally I stand in Ayosire." He looked around, "But this place... why is it so familiar to me?" Unease washed over the dark Traveler, "I feel... I am not alone." As lightning flashed, the Dark Scar Pheyden found himself surrounded by an army of Armodocs. Every direction was blocked by their bulky frames. A pair of massive purple and black Ayosire Armodocs warped in next to him, sandwiching him in further from a possible quick escape.

"So you have finally arrived." announced the obvious leader of the Ayosire Armodocs. "We have been waiting for you." it added, voice booming over the rolling storms surrounding them. "Impossible!" Dark Scar Pheyden spat back at them.

"After all you have been through..." alluded the lead Armodoc, "Are you truly so naive!?"

"I am not slave to fate. Do your worst... Abomination!" challenged the dark Traveler. Dark Scar Pheyden raised his Phase Arm, scarf flapping in the sudden breeze as he took aim at the leader's reverse colored partner.

The Pheyden found himself reacting on instinct. Blast the Reverse Armodoc. Turn and fire on the leader. Warp out and drop from above as he rained down fire on the partner's head. The Reverse Ayosire Armodoc warped away as Pheyden turned once again on the Ayosire leader letting loose a full blast. Simply raising its own massive Phase Arm, the lead Armodoc absorbed the energy without issue. Warping in between them, the Reverse Armodoc pushed the Traveler back away from his leader. Pheyden warped around them and opened fire once again. The dance was as deadly as it was beautiful, but this wouldn't last much longer as they matched each other's moves.

The great Phase Arm of the lead Armodoc raised up as the Reverse Armodoc warped away again. Dark Scar Pheyden found himself trapped in a surprise absorbing blast. He... he couldn't move... Yet he was moving... towards the Armodoc. "What is this!?" the Traveler shouted in shock. Dark Scar Pheyden was being absorbed. Torn piece by piece from the universe itself, the Armodoc was pulling the Traveler in with the mighty cannon arm. The Pheyden was helpless as he struggled to warp away, "...Can't warp!?" The Reverse Armodoc warped in behind the Traveler as Dark Scar Pheyden's final moments were stripped away from his body into nothingness.

The Ayosire Armodoc's body changed from purple and black to a glowing green Powered form. Inside the massive body, Dark Scar Pheyden found himself struggling against his fate as the body flowed over him like tentacles made of fleshy glowing green muscles. They were nearly impossible to fight against as the horror set in. Dark Scar Pheyden was being absorbed... he was going to die here. The tentacles surrounded his Phase Arm and pulled at the skin around his face...

"This one will fade..." the Powered Armodoc leader commented to his loyal partner. "Just like all the others." the Reverse Armodoc confirmed. Traveler Prisoners have a habit of struggling, but they all succumb to the absorption eventually.

Disappointment passed over the leader, "I had hoped for a greater challenge. To at least meet a worthy adversary." Powered Armodoc paused briefly, "This seemed to be..." The partner chimed in, "...too easy." Yes, but no... there was something else calling the leader's attention. "Wait..." the leader replied as he found his own body glowing.

"Do you feel that?" the Reverse Armodoc asked. "It can't be!" the stunned leader answered. The air held something dangerous in it again. In unison they spoke, "They. Are. Here."

Warping in was Commander Phosis with the Hybrid and Reverse Sarvos backing him up. Softly they floated down from the storms above and hovered over the two guilty Armodocs. "DESTROY THEM!" commanded the Powered Armodoc to his loyal army lining the area. No Sarvos was going to embarrass them here in Ayosire.

The Powered Armodoc warped away just in time as Commander Phosis opened full blast on the Reverse Armodoc without hesitation. The Hybrid and Reverse Sarvos warped away to let the Commander unleash his full abilities. As the green outlined remains of the Armodoc partner vanished, two more Ayosire Armodocs warped in on either side of Phosis. The Commander raised his hands causing the two closest Armodocs to faintly glow before launching them far away with a simple push. Hybrid Sarvos and Reverse Sarvos warped from above into the remaining Armodocs behind their Commander. The Armodocs glowed and then vanished away. All that remained were the loyal Sarvos.

"Hunt down the leader." ordered Commander Phosis. His arm glowed as a special Phase Arm formed over the hand. "Let nothing stand in our way." he added. Eliminating the Armodocs in this den of despair was their chief goal.

As a Sarvos loyal to Commander Phosis' goal, you need to eliminate any and all Armodocs as they approach you. The area is covered with the Traveler haters, they will not hesitate to absorb you if they have a shot. Like Hogan's Alley[1], you need to click on the Armodocs as they appear and before they fire. Be careful not to hit a fellow Sarvos as that will end the game and you will be absorbed.

After defeating the Armodoc army, you must then take on the Powered Armodoc leader. First multiple translucent copies of him will appear. You need to click on them when they completely overlap each other. Secondly a group of solid Armodocs will appear. You must click on the one that flashes to defeat it. Finally the leader Armodoc will transform into a more powerful incarnation, which you must click on to defeat.

If at any time the game becomes too challenging and you are defeated, you will be given the option to retry or continuing on to finish the story.

The Armodocs put up a fight, but before long the Sarvos had cleared a path to the Armodoc leader. The Powered Armodoc shuddered red as he appeared before the Sarvos trio. "The Armodoc has weakened." observed Commander Phosis. "Now is our chance to free the Traveler!"

"Take our strength, Commander" the Reverse Sarvos offered. "With honor." their Commander replied. The Sarvos glowed in unison as the Hybrid and Reverse Sarvos fed their own energy to the Commander. The Commander's body glowed even deeper green as it began to shift around. His shoulders pushed out as the body shifted into a new Powered Form. Warping to the top of the weakened Armodoc leader, Phosis pushed through the exterior structure and started to reach within the Armodoc. The Powered Armodoc's body began to glow green as Commander mentally and physically reached deeper within its massive body.

"Traveler!" Phosis shouted into the darkness within. "Fight for your life!" the Commander added. He couldn't see anything past the darkness so far. Phosis reached even further in, "Take my hand and claim your freedom!" A green tentacle of glowing flesh reached up and grabbed the Sarvos' hand.

Commander Phosis started to pull it up, but... it was fighting back... somehow... pulling him further down. "Wait!?" the Sarvos panicked. "What are you doing!?" The pull was too much, it wouldn't let him go. Commander Phosis inched further and further in pleading with the Traveler he was hoping to rescue. "Stop!!" he shouted as the Armodoc began to glow with a bright flash of white light. In an instant, they were gone.

The light subsided. A dark form knelt on the floor of Ayosire before them. "Commander...?" the Reverse Sarvos asked. It didn't respond. "Commander Phosis!" he shouted at it. The form started to stand upright. Green eyes glowed as the darkness peeled away revealing the deformed head of something new.

"I am not your Commander. I am your doom!" it finally spoke. With a raised hand, the Sarvos glowed red as a blast of energy hit them. "Commander Phosis warned you Traveler..." the Reverse Sarvos pleaded, "Look what you've become!"

"This power is worth the pain." the new Traveler casually replied, "Goodbye Sarvos. Phase on knowing you never stood a chance."

Lightning flashed all around them. Another team of Ayosire Armodocs appeared between the deformed Traveler and his Sarvos saviors. "You will all feel my vengeance..." he threatened, "Every last one of you!"

Raising his arm, a new weapon unseen before formed over the hand. Bigger and deadlier looking than even what the Commander had carried. "ARMO DESTROYER!!!" the deranged Traveler shouted at the uninvited guests. A green target floated in the air and landed upon the lead Armodoc. The damaged Traveler glowed a powerful green pulling bits of the universe within before unleashing its devastating blast. The Armodocs glowed red and pealed away from reality with harsh effect as everything went white again.

Standing in a serene flow of clouds alone within Ayosire, the new Traveler put away his destructive weapon. "I can feel their life forces..." he said almost with a tone of gloating. "Each one... now a part of me. Destined to witness all that I have planned." he reflected. The soft clouds rolled overhead and beneath his feet as if this had always been their way. "Ayosire... I will see you only in my memories for I shall never return to you." the Traveler offered to the calm scene. "All of Glyos will soon know the Curse of Ayosire at the wicked hands..." he boasted, "...of Phanost." Stepping forward, Phanost warped away.

Floating outside Ayosire once again, Phanost blasted away a few asteroids passing by. Although most of them offered only more rock, one final asteroid revealed pieces of something long thought to be lost. Within the chunks of asteroid was the rusty Old War technology known as a Gobon.

In order of appearance: 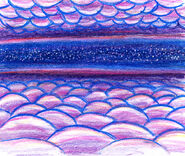