"The Ghosts of Nemica" is the second Passcode game, featuring characters from Wave 8 including Pheyden, Gobon, and Phanost.

During the "Old War", planet Nemica was attacked by the sinister Villser Virus. To save Nemica from becoming a Villser homeworld, Capital planet Metran used a deadly "Bio-Paralyzer" freezing all life in one moment. Now strange echoes call from Nemica's lonely past. Suddenly...

Poking out from the layers of ice and snow was a small Gobon head resting perfectly upright.

Floating near Nemica in deep space, Pheyden paused for a moment as if he heard a whisper. He was puzzled, Nemica had been a dead planet for far too long for anything to still be alive now. Still, he had to investigate. Quickly he warped the great distance from the far reaches of Nemica's last gravity wells to the planet's chilly surface. A snowfall had begun, but not enough to cover up the metal head of an ancient Gobon poking out next to his feet.

Pheyden was confused to say the least. "This is Old War technology." he finally said. "Very dangerous..." Pheyden added as an afterthought. The Gobon replied with silence. A wave of darkness washed over the surface towards Pheyden and his mysterious new friend. Someone was coming. A black suit and a green head appeared on the other side of the little Gobon noggin. The mystery guest had arrived in style with a green warp flash after the brief shudder of darkness.

Pheyden was again baffled. "What do you mean?" asked Pheyden in a pause. "Explain yourself!" he added more forcefully. This was no time for Phanost's little games.

"...You will know soon enough." was the only answered Phanost offered. The Drifter began to glow black with power as a crack opened up between the two Travelers. Gobon's head fell deep down the hole without a moment's thought. Phanost warped away after it.

Pheyden tried to follow, but his warp would glow and fade away with little success. "...Can't warp!?" he worried. There was no time, Pheyden jumped into the hole as it sealed behind him. The Traveler found himself falling quickly with no end in sight. One wall was a sheer mixture of color, almost like a stained glass window yet surely made of ice if touched. To either side was a wall with the growing number of icicles. Far more concerning if you were to pick a problem while falling to your possible doom. The icicles were sharp and growing longer by the moment. It was almost as if... wait, were the walls were closing in on him? Yes they were like a giant mouth hungry for a snack. There was no time, Pheyden spun himself around as he fell and used all his might to push faster before the icy mouth tasted the Traveler.

Deep below in an ice cavern was Phanost toiling away. Using his dark power, Phanost moved ice blocks around the cavern room in preparation of his soon to arrive guest. The little Gobon head rested on the ice floor next to Phanost as helpless as ever. On time as usual, Pheyden dropped into the room as Phanost finished.

"Why have you led me here?" accused Pheyden.

"Where I travel, you're destined to follow." answered Phanost. Another half answer bathed in mystery. Pheyden was growing tired of it. "Your twisted words mean nothing to me!" spat back Pheyden.

"Are you the one to challenge this fate?" ominously asked Phanost.

As Pheyden, you need to reassemble the Gobon before time runs out and Phanost is able to do it instead. Phanost has summoned a number of ice blocks in the room. You will need to click and drag them away in order to discover the missing Gobon parts. Once you find a pile of Gobon parts, click on them to begin the assembly process. Three rounds will discover Gobon's legs, arms, and torso to bring him back to 75% before the story continues.

With 75% of the Gobon now assembled during Phanost's little game, Pheyden found himself and the other two back on the cold surface of Nemica.

Phanost reflected upon the Traveler's craftsmanship, "...As if I had done the work myself."

"I'm tired of your games!" Pheyden angrily challenged. Phanost started to rise and grow in power. "Enough!!" the Traveler shouted. Action was needed. Not Chaos or even Warping away, just a good ole blast from his powerful Phase Arm to stop Phanost once and for all. The Traveler unleashed his full might upon the Drifter, but he wasn't prepared for Phanost's power to be able to match him... no, not match... overwhelm him. It knocked Pheyden off his feet briefly and left him kneeling to weakly recover. Phanost was too powerful to fight against if everything the Traveler had wasn't enough.

Phanost paused, "Something has changed." He turned around just in time to see them approaching. Three massive forms shown brightly in their pink hues against the whites and blues of Nemica's surface. "ARMODOCS!!!" cried out Phanost in a moment of true fear. "They have tracked us!"

"Take them now!" the lead Armodoc commanded. From across the snowy drifts the trio of powerful Armodoc Phase Arms charged until the bodies glowed in sequence with the wave of energy building in front of them. The charged energy of an Armodoc was not to be ignored if you planned to survive it.

"Stand together!" Phanost screamed out at the fallen Traveler. "They must be destroyed!" he added, turning back to the menace. The black and pink bits of the universe were starting to unravel from the two Traveler bodies. "Our battle..." Pheyden finally answered, "has drained my power." The powerful absorption blasts were not only tearing them apart, it was dragging them across the surface of Nemica towards their final destruction.

"Get up and fight!" demanded Phanost. Pheyden started to stand. The Drifter was right, they couldn't go out like this... and then he collapsed into the snow. "...You brought this on us both..." was all that Pheyden could get out as he drifted into the cold sheets of snow bed beneath him.

Phanost turned away from the fallen Pheyden and faced his destiny head on. "I will never be their prisoner again..." Phanost uttered quietly back as the waves of energy pouring at them. His skin grew dark black while his eyes glowed in piercing green. A wave of green energy shielded the trio of unlucky Nemica visitors before the might of the Armodocs. The pink energy was still too powerful to slow down their drag. Phanost's green energy field increased in power to no effect as they were still pulled towards their possible final resting place. "Too powerful..." Phanost muttered.

Time to change tactics. "Curse our fate!" Phanost replied to destiny and motioned the Gobon's head back on the large, round body it has always known as home. Aside from his massive Gobon fists, he almost looked friendly despite his known history. Time and energy were ripping away from the Travelers at full speed now with the green energy shield dropped once again. The Gobon powered on and raised his mighty fists. Pheyden and Phanost started to glow blue as the Armodocs began their final absorption duties required of all Travelers they come across.

Everything started to glow white until just the black silhouettes of Gobon and the Armodocs stood out against the stark background. Whatever the Gobon was doing with his undetermined powers, it was working. The Armodocs started to fade in and out of existence before him. Vague Traveler-type shapes floated within the fading outlines of the Armodocs like after images. Prisoners Travelers forever trapped within the cavernous bodies of hate known as the Armodocs. Before long, even they faded away.

A flash of light could be seen on the chilly surface of Nemica as far back in deep space as where Pheyden had started this little side adventure.

Pheyden awoke, changed from the events he had been unable to assist further with. "Such power..." the now transformed Scar Pheyden whispered at last. Even Phanost was moved to reflect, "...Such sacrifice." The snow fall had soften and their Gobon savior now matched in color to the icy surface he had long called home. Scar Pheyden stood up and looked at the clear blue Gobon, "You... saved us."

"It was made to defend those in need. Gobon gave its life force to stop the Armodocs." Phanost answered rather calmly.

"To defeat just one has proven nearly impossible." continued Phanost. "They live only to hunt us through time and space." Another pause from the Drifter as the wind blew past them. "You have been changed by what has happened here. Become something more..." Phanost thought of how much he was revealing for a second before continuing, "...more than what has become of me." Enough sentimentality, it was time to move on to the next task. "Goodbye Pheyden." Phanost offered before warping away.

Alone with the Gobon, Scar Pheyden turned to their quiet protector and contemplated what to do next himself as the snow gently fell upon the silent evening.

In order of appearance: 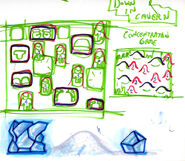 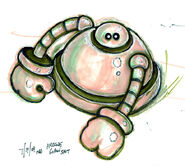