The Weaponeer is an homage to the 1982 Remco toyline "Lost World of The Warlord"[1] based on the Warlord comic book.[2]

His name is Fandar Skarta, the first Monkaarian. Eons ago he arrived though a rift in time/space. From where even he is uncertain. He knows only survival and is haunted by violent memories of war. On this savage new world he has named Monkaa there is cause to practice both each day. The natives of the planet are a harsh, uncivilized, and violent people, the Tribes of Monkaa. Brutal creatures that seem to form from the very elements that make up his strange new home. With his ability to forge, hone, and wield weapons from those same elements, he will tame them, he will control them, he will bend them to his will, he will civilize them. He will rule them! He is THE WEAPONEER!

The Weaponeer follows in the tradition of our previous 80s toy homages with special paint details to depict a eternal hero from our childhoods. These are known as the '80s Power! Tribute action figures: The Weaponeer, Eternal Barbarian, Uncle Overlord, Fake Barbarian, Optimum Gearo, and Vilhainatron.

"The Weaponeer is a Deluxe figure will include mock card back, all alternate Weaponeers of Monkaa heads, weapons, and Close Combat Armory set in a matching color scheme. First offered at SDCC 2013 and then released online September 9th, 2013. $15.00 each."[3] 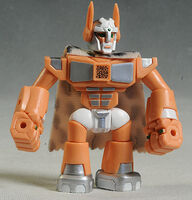 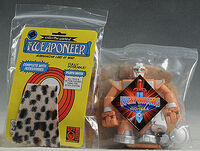 "The Weaponeer Super Deluxe is a Fully Armed Upgrade option which includes all that comes with the Deluxe figure, PLUS a full set of the Original Weaponeers of Monkaa Armory in solid white to match the paint ops on this figure. The Super Deluxe option (a $25 value) is a great value. Released September 9th, 2013. $20.00 each."[4] 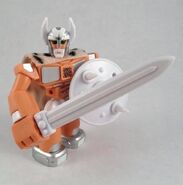 "The Weaponeer: Monkarrian Lord of War is a Deluxe figure will include all alternate Weaponeers of Monkaa heads, weapons, a hand made cape, and Close Combat Armory set in a matching color. Note: There are slight paint variations on this offering to set them apart from the originals. 80s Power! Tribute had a lighter green on the eyes. Released April 17th, 2015. $20.00 each."[5]

Retrieved from "https://glyos.fandom.com/wiki/The_Weaponeer?oldid=29722"
Community content is available under CC-BY-SA unless otherwise noted.