Deep beneath the stormy seas of Neptune, great cities loom majestically in the shimmering twilight of a vast and beautiful water world. Here the mighty Triton peoples live. Not content to see the sun as but a glimmer and the stars as tiny ripples floating on the surface of the sea above, Astro-Nautilus and his band of Triton mariners venture forth to sail and chart that greater ocean, Outer Space. Often visiting our planet, they land, secretly, without all human knowledge, in the very depths of Earth’s great oceans.

From a secret base, beneath Earth’s Oceans, “COSMO NAUTILUS”, Great Warrior of the Planet Neptune, takes command! He is a direct descendant of the first men of Neptune, who landed on the Earth, many centuries ago. Those early Explorers found Earth’s atmosphere, consisting mainly of H2O, to be both friendly and abundant, and almost identical to that of home. Earth’s inhabitants, on the other hand, seemed far too primitive, to have created the great marble monuments that lay in ruins across the land. Then, these curious Cosmonauts, discovered the Great Library of “Lost Atlantis”, and learned that beyond the border of breathable water, there lay a Fabled Country, known as “DryLand”, where beings of a higher order, also bore the name of “Man".[1]

POSEIDA, Warrior Woman of the planet Neptune, was a member of the Band of Triton Mariners that accompanied ASTRO NAUTILUS on his virgin voyage to the Blue Planet. POSEIDA so loved Earth’s majestic Oceans that she remained behind to guard the “Citadel Beneath the Sea”, home base for the growing Neptune Colony. Astride her trusty hippocampus, “Sea Biscuit”, she commands the Neptune Cavalry. Her sharp eyes stalk the enemy, as the brave Mariners of Neptune fight a never-ending battle for survival, against the Denizens of the Deep. Unlike the surface race of Humans, who need only fear each other, those who have colonized the Watery World, below, must be on guard, continuously. For, in that sub-aquatic domain, emigrants from the Planet Neptune are not high on the “Food Chain”. Whales, and Sea Serpents, big and scary, refer to them as “Calamari”.[3] 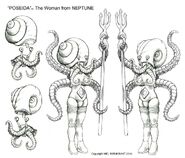