Within Point Cerrek, select Glyans learn how to operate the newly developed Glyarmor and Variable Reflex Drivers in controlled environments, all under direct Traveler supervision. These soldiers also take part in a specialized OTR virtual program in conjunction with intense mental and physical conditioning.

The Esedeth Mobile Patrol stands as the first division to incorporate both VRD tech and non-Traveler Glyarmor use."[1]

"One of the most widely used Variable Reflex Driver configurations on Planet Esedeth is the Trekrunner.

Based on Rig Runner mechanics, the Trekrunner is capable of moving at extremely high speeds and possesses low altitude flight capabilities.

EMP soldiers have been known to push the maximum limits of these fast moving and rugged Drivers, especially when facing the gravity defying "Quickships" commonly employed by the various relic hunters who feed on Esedeth's hidden treasures.

The Trekrunner form can be activated within any Variable Reflex Driver by connecting to a standard Glyan Blaster set in "data key" mode -as long as it contains the correct Trekrunner assembly code.

"Another VRD configuration that is put to heavy use on Planet Esedeth is the Guard Walker.

Operated by a single EMP soldier, the Guard Walker excels at traversing the ever shifting Orphormic Sands that cover so much of Esedeth. Some believe these strange sands actually possess a collective consciousness.

It is rumored that long ago the very surface of Esedeth swallowed the planet's first advanced civilization, leaving only scattered ruins as a warning to those who would dare trespass."[3]

"Responding to an urgent distress signal sent from the Point Cerrek Space Station located high above Planet Esedeth, Task Force Volkriun mobilizes under the new leadership of the formidable Commander Vulldren. Outfitted with the latest Variable Reflex Driver technology and tactics, the battle hardened unit stands prepared for the worst. Reforged and sworn to never let their legion fall to ruin again, they forever honor the many brothers they lost at the Siege of Volkria. But will their collective might alone be enough to challenge the true enemy of the Glyos System?"[4] 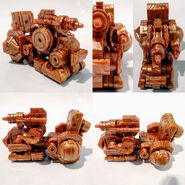 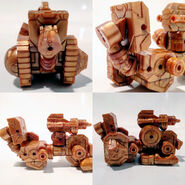 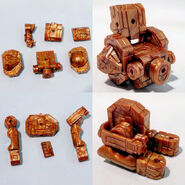 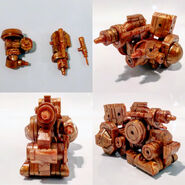 Trekrunner
Add a photo to this gallery 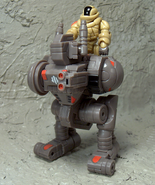 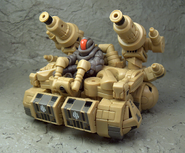 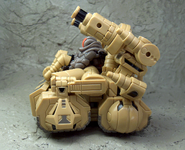 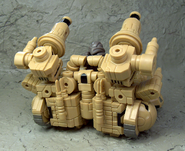 Zullen commander at Outpost X-7. Zenodeath Noboto is checking out the build Quality of the older technology.
Add a photo to this gallery

"Its fighting weight lands at just over 2 pounds (with the drivers). The build is fully contained with a few sneaky "cheats". For more stabilization you can add 4 extra Switch Pins to really lock it up. Then you can hold it by one end and it barely bends."[5]

Uses 4 standard Robo Force/Gendrone Force Defender kits and 4 standard Zeroids/Gendrone Zereon kits. The front half of the Caliber Crusher is the same as the Treadbuster. 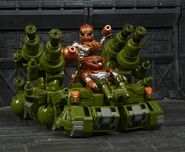 Zullen's Caliber Crusher ride
Add a photo to this gallery 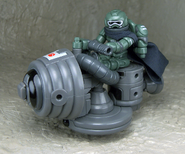 Strike Team Sendred
Add a photo to this gallery

Uses 1 standard Zeroids/Gendrone Zereon kit. None of these designs have official names according to Matt Doughty as they are simply Test Units. 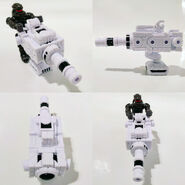 Zereon Blaster
Add a photo to this gallery 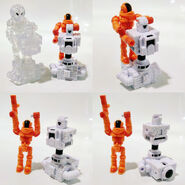 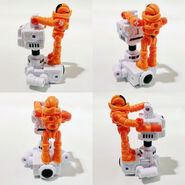 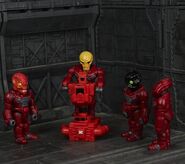 Uses 1 standard Zeroids/Gendrone Zereon kit. A variation adds a single Robo Force Weapons Set blaster to the build which is included with some Glyan figures. 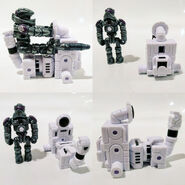 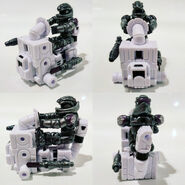 Retrieved from "https://glyos.fandom.com/wiki/Variable_Reflex_Driver?oldid=25891"
Community content is available under CC-BY-SA unless otherwise noted.