"Soon after breaking the chains of servitude to their god-like creators, the Delphi set in motion a plan to engineer a new generation of beings that might one day stand with them against the dark forces of the ever growing Glyos System.

Traveling through the records of time and space, the Delphi searched for naturally occurring lifeforms that they could help elevate to higher planes of existence, all the while being feverishly pursued by the dogged agents of their former masters.

During a mission to the distant and aqueous world of Sollnoria, the Delphi discovered an avian race of beings that inhabited one of the largest islands on the planet. These noble yet primitive animals seemed to act as guardians to the various smaller creatures dwelling within the large jungle located at the center of the island. After a careful and prolonged observation it was decided that this species, now named the Varteryx by their celestial benefactors, would serve as the foundation for one of the most ambitious evolutionary experiments in the history of the Delphi."[1]

Just as he began to make his final journey, the beaten Traveler suddenly awoke on a strange new world, surrounded by extraordinary wildlife and a vast ocean. Hades had been teleported to the Planet Sollnoria, saved by the Varteryx for reasons that would soon become clear."[2]

Now with a small measure of hope restored and a reforged resolve, a battle-worn Glyaxia Command slowly rises to settle the score."[3]

"Glyknights can "Alter" and change into this Demi-Varteryx mode when needed, due to their special hybrid blood."[4] 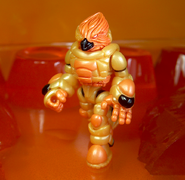 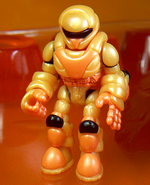 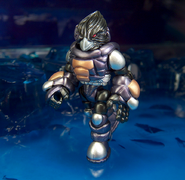 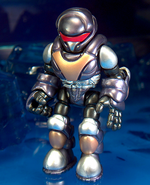 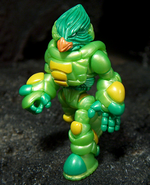 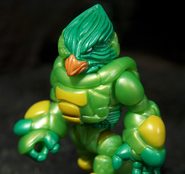 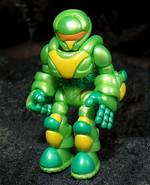