The mighty Volcan Peoples are beings of living fire that burn eternally. They live on Mercury, the planet nearest to the sun of the Solar System. Rivers of molten metal churn past their majestic cities that glow red hot in the blinding light of their Sun. Inferno and The Flame Men of Mercury travel the Universe in the great chariots of fire that the people of Earth call comets. On their journeys they wear protective suits of thermal alloy to prevent the freezing cold of outer space from snuffing them out.

VULCANO The FIRE KING of MERCURY blazes through the firmament in his "Chariot of Fire”, shining brightly, like an incandescent filament in the vast vacuum of Outer Space. Dare he venture forth into the colder outer regions of Planet Earth and beyond? Maybe so, but on this journey, he is heading in the opposite direction. Guided by his navigator, the elusive Bird of Fire, and fueled by his own burning desire to discover the “Secret Source” of all Life Giving Energy, "VULCANO The Inextinguishable" is heading towards the Sun, itself, like a moth drawn to a flame. Will he find the answers he is seeking, or be consumed by the Sun's radiance, instantly incinerating, in a Blaze of Glory?[1]

MOLTINA, the Molten Woman of Mercury, is the hottest babe in the Galaxy. Not content to merely melt hearts, on her native planet, Mercury, she travels through the frigid depths of Outer Space, aboard an incandescent Chariot of Fire. Her mercurial libido is ablaze with inextinguishable desire, as she passionately strives to oxidize with every Outer Space Man she encounters, along the Milky Way. Therefore, all ye sailors of the Starry Sea, Beware! MOLTINA’S smoldering kisses erupt in tongues of flame. To mate is to incinerate! And many an ardent would-be lover, drawn to MOLTINA, as a moth is to a flame, has been known to self-immolate, in her fiery embrace.[2] 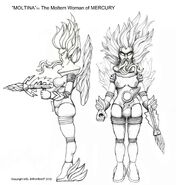 MOLTINA, the Molten Woman of Mercury
Add a photo to this gallery

Retrieved from "https://glyos.fandom.com/wiki/Volcan?oldid=11727"
Community content is available under CC-BY-SA unless otherwise noted.